Charities : Are they using Africa?

Its more or less part of a rich English/American student's journey, at some point they will find themelves in scruffy clothes, halfway across the world posing with hungry children in a photo.
Volunteering.
﻿﻿﻿﻿

Is it what we do when we want to feel like we have "done our bit?"
﻿ ﻿
There are countless charities and programmes across Africa tempting the young (and old) to be adventurous, to save lives,to be changed forever, and all for only £2000 exclusive of flights, but are these charities actually being charitable, or are they using Africa?
I myself have volunteered in Africa, I have been to Uganda three times. I've never been on a paid group programme, probably because I could never have afforded it.
Myself and a friend had organised our own work experience in Kampala's Mulago hospital, luckily my friend was half Ugandan and we had a place to stay just outside town in Kireka.
The experience had been arranged through a family friend. And was quite frankly, horrifying. I'm not sure what kind of work group projects do, teaching or painting maybe, this was a far far cry from that. 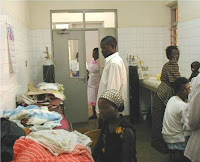 Dodging the screaming patients lying on the floors of the hospital, I (my friend had collapsed in hospital due to being given wrong malaria tablets by Boots @ Heathrow) was left alone and told I had to administer injections to premature babies. Nearly all of the premature babies were orphans, abandoned, dumped in bins, put in toilets.I had to act quickly, if I was too slow, oxygen would enter the baby's blood and kill him/her. By the way, I was 19 and not a medical student, I studied business, infact I hate hospitals.
It was generally just awful, and I suspect no paid for programme would ever venture to such places to do such things. I am however very grateful for the opportunity to work with local workers and talk to them genuinely ( although most barely spoke English), not as part of a tourist group. 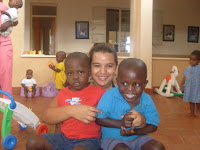 I don't like to say we gave up, but we moved on, we drove to every orphanage in the area to find a place to help out at until we came to Watoto (we had previously met the manager whilst working in the hospital).  We ended up volunteering for the rest of our trip, and the two subsequent trips.
Unlike the hospital, Watoto IS one of those charities that brings truckloads of volunteers over every month.

Watoto employs locals for practically all of its positions, the bringing over of volunteers to say, build houses in the villages, isn't just about saving money and depriving locals. Teams of volunteers will work alongside paid locals, it is then these same teams that will go back home, spread the word, invite the children's choir to their hometowns, and generate funding that saves over 2000 children's lives across Uganda.

Ive seen the children come in as practically dying babies, and go on to join families in the Watoto village where they will be schooled and looked after properly.


Although, I'm led to believe cases like Watoto are rare.

Why is it that some charities have been standing for decades, yet nothing has changed?

Infact. It's not even just charities any more. BUSINESSES exist who send volunteers to Africa, which leads me to believe the money is just used as business profit.
They bring over thousands of volunteers a year who pay an obscene amount of money to be placed in "a poor persons home" To have an experience of teaching in a dirty school with no roof and no resources, to rough it up for a few weeks and peer through  a window at what life is like for poor little Africans, gathering tales to tell their friends.
Why is it that after all those years, they are bringing people to work in unsanitary conditions? As a charity why haven't they improved things for locals? Maybe because then rich British people coming to volunteer wouldn't feel like they've done their bit for dying Africans.

Maybe I'm being cynical, but I cant help thinking some charities are purposely keeping locals in perpetual poverty because it brings them more business and more control
I'm not even going to go into charities who embezzle money or spend it all on administration, but by now, we all know that aid and bringing spoilt foreigners over to cry and feel guilty at Africa DOES NOT WORK.
The only way things will ever change is in sustainable investments such as farming and businesses. But if the African could do it all for himself then where would the students go? Africans don't need continual handouts and westerners staring at them, they need to be given the opportunity to do it for themselves.
There is then of course the argument that volunteers PAY to work whilst locals GET PAID to work.
But surely it wouldn't take a genius to work out a way in which locals can still be paid to do the jobs and volunteers could come and assist.
I'm not anti volunteer, both the locals and volunteers have a lot they can learn from each other. But if you are considering volunteering overseas. Choose ethically. A charity or business who relies strictly on volunteer or paid foreign work, will always do so, these companies will make sure they keep Africa in poverty forever while appearing to do the honourable thing.
Chose a charity that is grass roots (close to the ground, less admin, more local work), chose a company that is sustainable and will benefit locals and their communities in the long run, without help or handouts.
Amaziah Jewellery, amongst many other great projects, exists to support local craftspeople in making a living for themselves. As we grow we intend to provide workers with training in exporting their own goods, and invest in machinery in order to enable them to carry out larger orders.
I will be working with some community projects and distributing clothing/English learning materials for business which will hopefully set some people on their way. We must be careful that what we do isn't taking away a job for a local. The days of slavery are over.
Do definitely visit a country in Africa though, you won't be disappointed :)

Posted by Amaziah Jewellery at 14:44